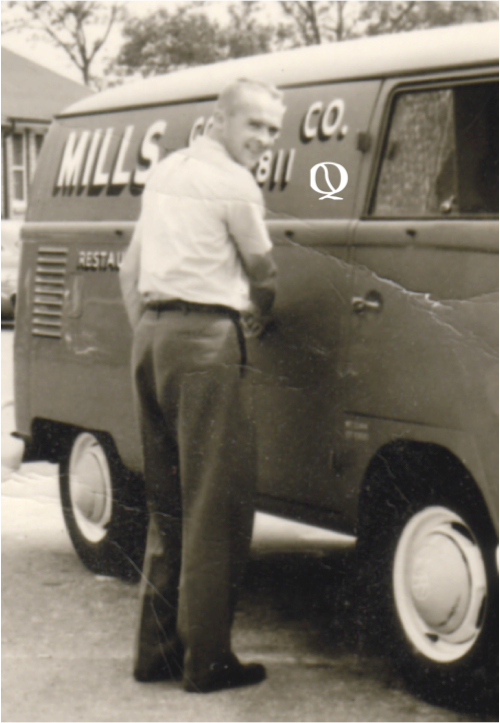 The Queen Bean is the online retailer for Mills Coffee Roasting Co., one of America’s oldest coffee roasters. Mills was founded by Thomas Mills, a Scot, who emigrated in 1860 and promptly opened shop as Mills Teas and Butter. That business thrived and Thomas decided to expand to include his new favorite beverage, coffee. Ever the perfectionist (and occasional control freak), Thomas purchased his first roaster in the late 1800s / early 1900s and devoted himself to mastering his signature roast, Mills Blend.

Thomas ran the company with the help of his sons – after pulling a morning shift as roasters, they piled bags of freshly roasted coffee into a wooden cart for delivery to their storefronts throughout Rhode Island, Connecticut, and Massachusetts. (All Mills stores were closed during the Great Depression.) Eventually, Thomas’ son, Fredrick, and son-in-law, Gordon, purchased the plant from him. In the early 1950s Fredrick’s son, Kenny, followed suit and purchased the plant with his wife, Alice. In the early 1980s, G4, Mills’ current owners, stepped up to bring Mills into a new era of coffee as art, starting with the introduction of decaf. Within a few years of taking over, Susan, affectionately known as the QweenBean, and her brother, David, expanded their offerings beyond Mills Blend to include a variety of fantastic single origins, exceptional decafs, powerful dark roasts, and exotic blends and flavors. Susan took over the financial and creative dimensions of the company while David mastered the art of roasting and efficient plant design.

Within a few years of assuming leadership, they tripled their volume and designed a new roasting plant that actually increased production while improving the quality of their roasts. In addition to internal improvements, Susan and David went on an aggressive campaign to educate customers on the best brewing techniques and sophisticated coffee drinks. Today, G5 is learning the ropes. Susan’s son, Dave, currently works at the plant as an all-around go-to man, simultaneously stepping in as roaster, sales partner, deliveryman, and graphics assistant. Her daughter, Nicole, is bringing Mills into the world of online retail, with TheQueenBean.com. Click here to learn more about The Queen Bean.

If you still want more, check out our animated Mills / Queen Bean storyboard!